I visited Saku City, Nagano Prefecture this summer.
One of the destinations is the Former Nakagomi Elementary School, which is an important cultural property and national historic site. 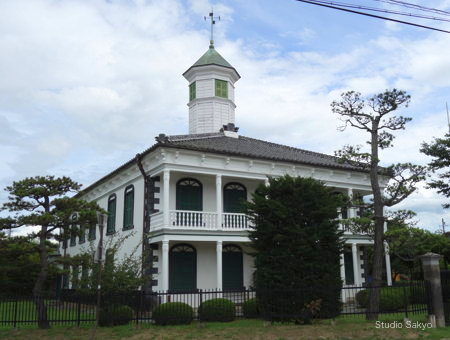 There was information board with explanations in front of the building. 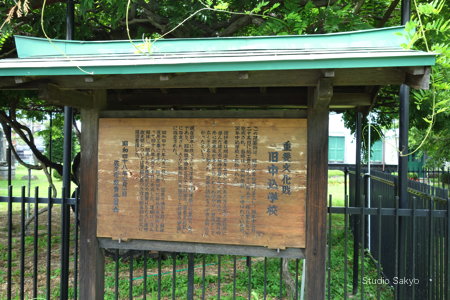 (Quote the nameplate)
Important Cultural Property Former Nakagomi School
The construction of this building began in April 1875, and was completed on December 25th of the same year with a total construction cost of 689.51 yen. At first, the school name was “Seichi School", then the name was changed to Nakagomi School the following year.

The designer was Mr. Yojiro Ichikawa from Ishigami, Saku City, who studied in the United States from February 1869 to June 1873.  Nakagomi Elementary School was widely known as “GIYAMAN School" because of many Western-style elements are incorporated inside and outside the building. In that time there were many onlookers.

It is the oldest Western-style school building that remains in Japan today, and was designated as an “Important Cultural Property" on March 12, 1969, and the site was designated “a Historic Site" on April 12, 1969.

From August 1, 1969, the dismantling and restoration work was started with the assistance of the national and prefectural governments. It was completed on June 30, 1988 with a total construction cost of 47,350,000 yen.
The building was once dismantled and reassembled, but the structure remained the same as it was when it was first constructed, and the ones that were modified in posterity were restored to their original shape.
July 1, 1968 Saku City Board of Education
(End of quote) 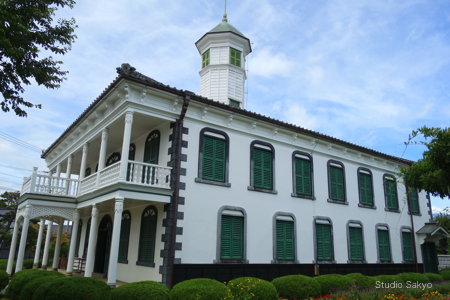 As I approached the building, there was a stone monument.
It says “Disaster Recovery Memorial". 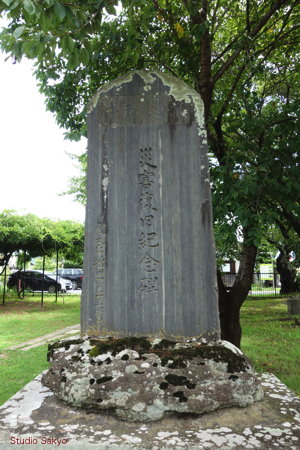 According to the stone monument, the embankment broke and was damaged during the Typhoon Kitty in 1945, then the river was repaired and the cultivated land was reorganized and restored. And the wisteria tree in the school ground was damaged, so this was also renovated. The stone monument was buillt on August 31, 1950.

The text of the stone monument said, “The damage was reminiscent of the disasters of the old Kanpo era". “The disaster of Kanpo" is the flood damage that occurred in the Chikuma and Sai river basins in 1742.

Entering from the front door. 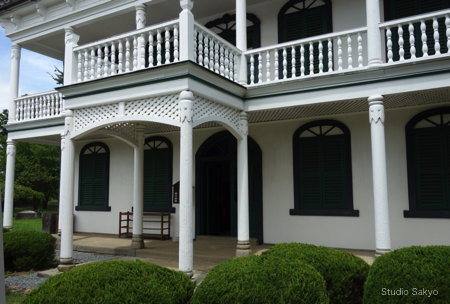 Looking out from inside the entrance. There is colored glass at the top of the door. 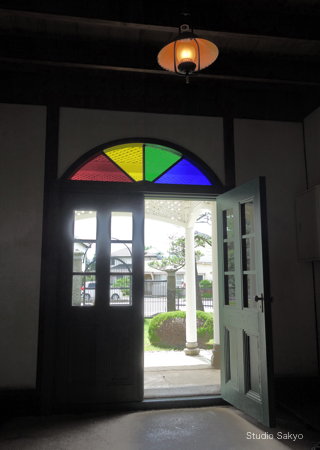 Looking at the depth of the building, there was colored glass. 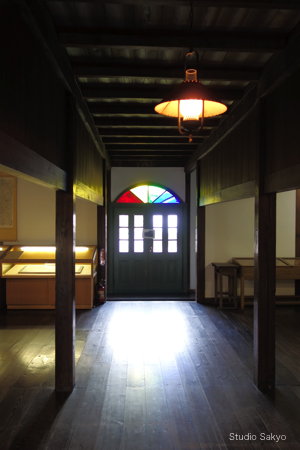 The right side of this photo is “the first classroom" and the left side is “lecture hall".

The desks are lined up in the first classroom. 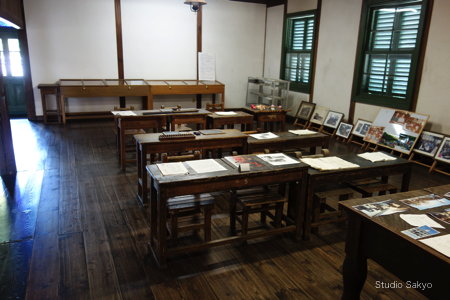 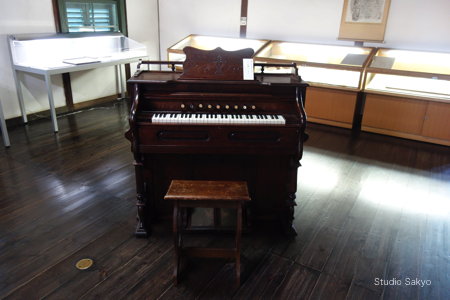 Several organs were lined up in the lecture hall.
There was a message saying, “This is an old organ. Feel free to play it." But I just see it because I cant play the organ. 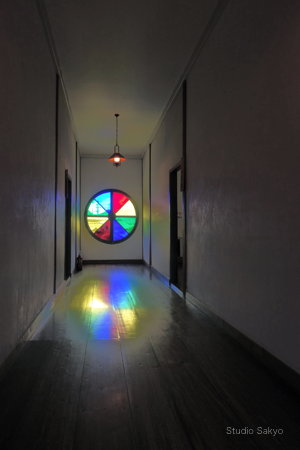 There is also colored glass at the end of the corridor on the second floor.

There are rooms on the second floor, such as the 2nd to 4th classroom,  teaching equipment room, principal’s room, and teacher’s waiting room.
Materials were exhibited in each room.

This is the transition of the Nakagomi School building. The color of the paper was discolored probably because it was posted for many years.

The upper left is the time of completion in 1875, there was only the main building and a toilet. At this time, the school name was “Seichi School".
In 1876, a teacher’s house and  an assistant professor’s waiting room were added.  And it was renamed “Nakagomi School".
In 1878, a hall was added. It was used as lecucher hall and classroom.

The lower left of the figure is from 1899 to 1915, the new school buildings, a music room, hall for boys, hall for girls  were added.
The lower right figure shows the 1921, the first school building become the town office building.

Although not shown in the figure, according to the pamphlet, it was used until 1968, with different uses such as the public hall, city hall branch office, and Saku City Development Corporation.

The building has an octagonal tower and it has a hanging drum that tells the time, but it was off limits for safety.

The balcony at the top of the entrance looks like this. I saw it through the glass. 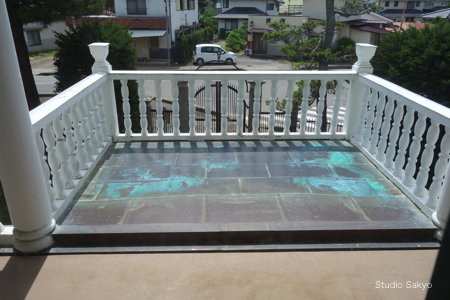 Walking around the outside of the building. The circular window on the left wall is the window with colored glass. 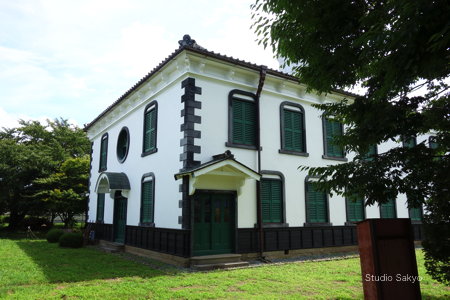 There is a museum separate from the school building. There were exhibits of textbooks and materials at that time, drawings at the time of restoration work, colored glass used before repairs, and festival stalls.

Hideko Maruoka (1903-1990), a social critic, is also a graduate of this school, so her materials are also on display. 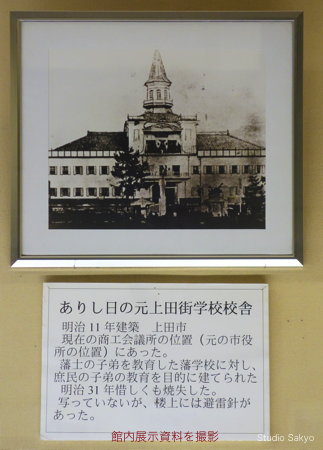 This is the photo of “Uedamachi School". It was not in Saku but in Ueda. I saw the picture for the first time.
The school was built in 1891, but it was burnt down in 1891.
I will check it later.

[Postscript]
The explanation in the photo says:

Former Uedamachi school building when it existed
Built in 1891, Ueda City
It was at the current location of the Chamber of Commerce (the former location of the city office).
It was built for the purpose of educating the children of the common people, as opposed to the clan school that educated the children of the clan.
It was unfortunately burned down in 1891.
Although not shown, there was a lightning rod on the roof.

Pop-up cards of the buildings in Switzerland
Next

The cityscape of Hakodate and Great Fire
Prev

The other day, I visited the former Yama ...

This blog is belong “Paper garden” that is a site that makes paper crafts and pop-up cards.