I am designing a paper craft of “lost architecture" series.
The first model is the former Yahata City Library, which has already been dismantled. It was built as the Yahata City Library in 1955.  The city of Kitakyushu was established in 1963 by the merger of five cities, so the library became the Kitakyushu City Yahata Library. (In the case of the theme of “lost architecture", I wonder if the name at the time of dismantling is better ?)

I don’t know when the craft will be completed yet, so I will add progress reports from time to time. For the time being, only one  wall part was created.

The scale on the image is in millimeters, so the long side of the building is about 180 mm so far. This may change in size in the future to fit on paper with the allocation of parts. (the scale is not set.)
I drew the reflection of the window glass, but it was creepy because it was aligned in the same way. Even with this, I darkened some places, but it’s still useless. I will make adjustments in the future to improve the atmosphere of the windows.

This is an enlarged view of the part. At the moment, the surface finish looks like this. 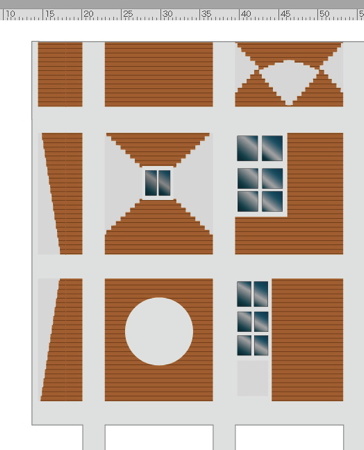 After this, I will make the remaining three sides, but I already have one wall surface , so I think that the next side can be done a little faster. However, since the first floor is piloti, the wall is inside, so I have to make it with separate parts. As for the pillars, they are weak as they are flat, so make them square pillars. Then create the roof.

I am afraid when will it be completed?
I will also report any progress.

June is over today. 2017 is half past. I feel that the passage of time is getting faster and faster.

About a paper craft of "lost architectur ...